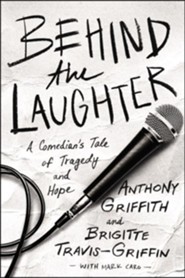 Behind the Laughter:
A Comedian’s Tale of Tragedy and Hope
By Anthony Griffith and Brigitte Travis-Griffin

Anthony Griffith, a stand-up comic from Chicago’s South Side, has lived on the borderline of comedy and tragedy. At the very time his career as a stand-up comedian was taking off, and he had finally achieved his dream of appearing on The Tonight Show, he was also enduring an unimaginable personal nightmare: his two-year-old daughter, Brittany Nicole, was dying from cancer. While Anthony performed under bright lights, he struggled not to succumb to the darkness of losing a child.

Behind the Laughter asks, When your world is falling apart, how do you keep going? It’s the story of how Anthony and his wife, Brigitte, learned to endure the most painful of times and emerge on the other side of the “zombie years.”

This memoir is deeply moving yet also humorous—packed with laughs as Anthony takes us from his gun-toting grandma’s home to Chicago’s white and black comedy clubs, then to Hollywood, and to the world of network television. The surprising twists along Anthony’s path highlight the power of God that goes before us and prepares the way—a truth that later encourages Anthony and Brigitte after Brittany’s death and moves them to reach out and comfort others going through similar difficulties.

With humor and deep insights into the human spirit, Behind the Laughter explores the bonds of not only parent and child but also husband and wife. While Anthony and Brigitte’s story is uniquely theirs, it elicits powerful, relatable emotions and lessons that are universal and inspiring.

Anthony Griffith is an American comedian, actor, writer, and philanthropist. He focuses on the reality of life from a humorous perspective. Anthony finds his energy from his positive approach towards the tragic turns his life has taken.

Since his initial M. S. or Multiple Sclerosis diagnosis in 1994, Anthony had undergone a rebirth, which he calls his new normal. His positive outlook on tragic experiences, coupled with strategies mandatory to excel in the 21st century, has compelled him to flourish as a dynamic, entertaining, and motivational speaker.

Dr. Brigitte Travis-Griffin is a clinical psychologist specializing in a concierge delivery system of therapy for entertainment and creative professionals. She and Anthony Griffith have been married for more than thirty years. Brigitte received her PsyD from the California School of Professional Psychology and her BS from UCLA.

I think the expectation from readers might be “Ok, this is going to be a funny book”. I mean, Anthony Griffith is a comedian, so it stands to reason the book will be hilarious, right? This is not that time of book. This is an honest look at the struggles that both he and his wife faced with the challenges life brought them over and over again. Each provides their unique perspective on the situation, what they were feeling and experiencing. The emotional trials they’ve gone through was heart-wrenching. One thing stuck in my mind: grief is grief. We can’t compare our grief with another’s. We can’t say “My grief is worse than yours” because we honestly don’t know what others are going through. Even as a couple, Anthony and Bridgette grieved in different ways. And how difficult it is, to experience such loss and yet life just goes on. If you’re curious, go online and find some of Anthony Griffith’s stand up, especially on the Johnny Carson show. During this time, his little girl was in the hospital undergoing chemotherapy treatments. This is a good read, especially for those that are struggling with their own tough times. My received a complimentary copy from the publisher. The honest opinions in this review are my own.

This entry was posted on April 4, 2020 by ConsultingWriter in Books, Non-Fiction, Reviews and tagged Anthony Griffith, Behind the Laughter, Brigitte Travis-Griffin.

Follow The Consulting Writer on WordPress.com
Join 1,632 other subscribers